Writing for web and print. Consulting with lawyers and writers on SEO and web-writing issues including indie publishing concerns, defamation (online reviews), and copyright infringement matters.

1.  Reba writes for web and print. She writes her own stuff as well as writing for others, usually lawyers and law firms.

She also consults with writers and website owners regarding legal concerns including copyright infringement and defamation issues (such as negative online reviews and unauthorized use of content or images).

Reba’s articles have appeared in a variety of national publications, including the Chicago Sun-Times, Reuters, CNN.com, Computer Shopper, AnswerBag, Chefs.com, and AllGreen, as well as regional publications across the country and trade publications like the Florida Defender.

Working with famed marketing guru Bob Bly, Reba was a pioneer in the e-book marketplace: her first e-book, Legal Issues for Writers, was published by CTC Publishing ($29.95) in 2007.

In 2011, Reba was honored to be asked by nationally recognized criminal defense lawyer and founder of the Florida Capital Resource Center, Terence Lenamon, to co-author a public-interest book published solely for Kindle readers, as The Death Penalty Indigent Defense Crisis: Representing the Poor when the State wants to Kill Them and it’s Paying Your Bill.

Reba publishes her own e-books under her own name and under a pen name (or two).

Her voluntary simplicity lifestyle blog, Everyday Simplicity, became nationally syndicated in 2006 and a subscription to her blog RebaKennedyLawyerWriter appears on Amazon.com.

Reba was honored to be entrusted with co-authoring a public interest blog with Judge Tom Rickhoff in 2008 – 2010, where information helpful to the community was shared (e.g., “10 Tips When Visiting the Courthouse,” and “Caregiver Support: Angel Food Ministries Is Great – Quality Food for Half Price.”).

Reba has co-authored a blog focusing on death penalty issues with Terence Lenamon since 2009. She has also acted as ghostwriter and writing coach to lawyers and law firms publishing blawgs around the country.

Important to those interested in internet publications, Reba consistently achieves top Google rankings (top 1-5) in search results numbering in the millions with these results holding steady over a period of years. She keeps up with the latest developments in Google search engine requirements as well as that of competing search engines Bing and Yahoo on a daily basis. Reba shares updates and new SEO info both through her blog posts and G+ posting as well as notifying clients personally of possible search engine ranking issues that may apply to them.

Early in her writing career, Reba worked as an independent contractor to the nationally-known legal marketing firm PaperStreet Web Design, communicating with law firms around the United States (and around the world) and writing website content incorporating search engine optimization (SEO) standards necessary to compete for the top Google Search Engine rankings in the competitive internet legal marketing arena.

She’s been known to write speeches for clients that have been presented at such prestigious locales as conferences hosted by the London School of Economics.

Reba also provides consulting services to individuals and firms seeking support and guidance regarding internet publications, both in building and maintaining social media strategies as well as writing content for websites, blogs, in-depth articles for the web, and other works intended for publication on the internet.

For more information, consult Reba’s Amazon author page, or write her at reba@rebakennedy.com if you are interested in learning more about her portfolio or reviewing .pdf versions of her published work.

Reba has been consistently given an AV- Preeminent (TM) Rating – Martindale Hubble: “a lawyer’s peers rank her at the highest level of professional excellence.”  She was named one of the Top Lawyers in Texas – 2013. 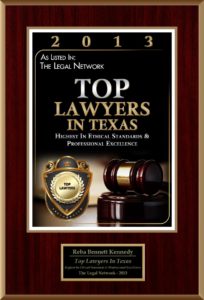